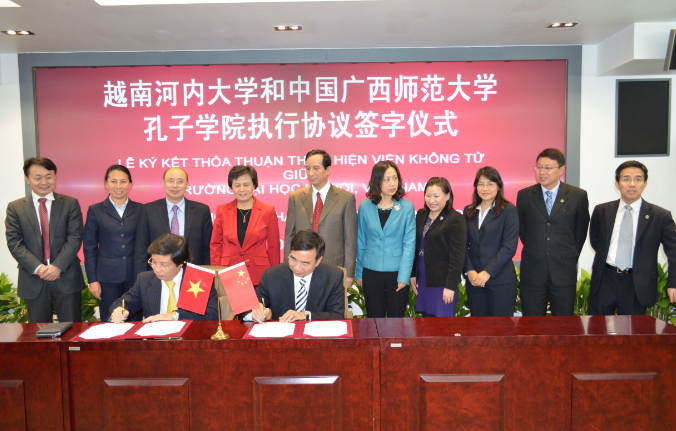 Do Thanh Van, head of Vietnam's only Confucius Institute, remembers vividly the day the institute was established.

Since the Confucius Institute at Hanoi University was established six years ago, it has been committed to promoting Chinese language education and Chinese culture, as well as strengthening the friendship between Vietnam and China, said Van, who recalls that a tree of friendship was planted at the institute's opening ceremony.

The first, and so far only, Confucius Institute in the country was founded in 2014 under a partnership between the Hanoi University and Guangxi Normal University in China.

By the end of October, the Confucius Institute at Hanoi University had attracted nearly 2,000 students, and more than 35,000 people have participated in a variety of cultural activities it has organized, according to Van.

Today, the institute has become an emblem of Vietnam-China friendship and their cultural exchanges, said Van. It plays a bridging role in deepening the mutual understanding and friendship between people from the two countries.

This year marks the 70th anniversary of the establishment of diplomatic ties between China and Vietnam. For this special occasion, the institute has held a series of events to promote language and cultural exchanges, including the annual language proficiency competition of Hanyu-Qiao or Chinese Bridge, Chinese Culture Experience Week, and a seminar on the cultural exchanges between Vietnam and China in the past two decades.

Van said these events are helpful in promoting the healthy development of Vietnam-China friendship.

Noting language helps spread knowledge and is an important tool for people to communicate with each other, Van said that by learning the language, Vietnamese people can understand China in a deeper and more comprehensive way. This is conducive to supporting the exchanges and cooperation in other sectors such as technology and culture, she said.

With deepened cooperation in trade and economy between China and ASEAN member states including Vietnam, the rising popularity of the Chinese language is affecting all sectors, said Van.

Do you have some great news to share?Email us at