HANOI, Dec. 13 (Xinhua) -- The final of the third edition of the Chinese-Vietnamese interpretation contest for Vietnamese college students was held in Vietnamese capital Hanoi on Sunday.

Hosted by the Confucius Institute at Hanoi University, the contest this year focused on environmental protection. The final consisted of two rounds of Chinese-to-Vietnamese and Vietnamese-to-Chinese interpretation, in which contestants were required to interpret content related to the topic.

The contest was won by Nguyen Thi Minh Thu, a senior majoring in Chinese at Hanoi University, who stood out from eight other fellow finalists.

I took part in this competition to improve my Chinese in order to better communicate with my Chinese friends, Thu told Xinhua in fluent Chinese, adding that she aspired to become a Chinese-Vietnamese interpreter after graduation.

Luo Jun, a principle of the Confucius Institute at Hanoi University, said that the demand for Chinese-Vietnamese translators, especially interpreters, has been increasing rapidly thanks to the growing economic and cultural exchanges between China and Vietnam.

Such a contest can help contestants deepen their understanding of both Chinese and Vietnamese culture, who can make significant contributions to enhancing the China-Vietnam friendship in the future, he said.

The popularity of Chinese has been heating up in Vietnam, as 9,855 people have taken part in multiple Chinese Proficiency Tests organized by the Confucius Institute at Hanoi University this year, setting a record high despite the impacts of COVID-19, according to Luo. Enditem 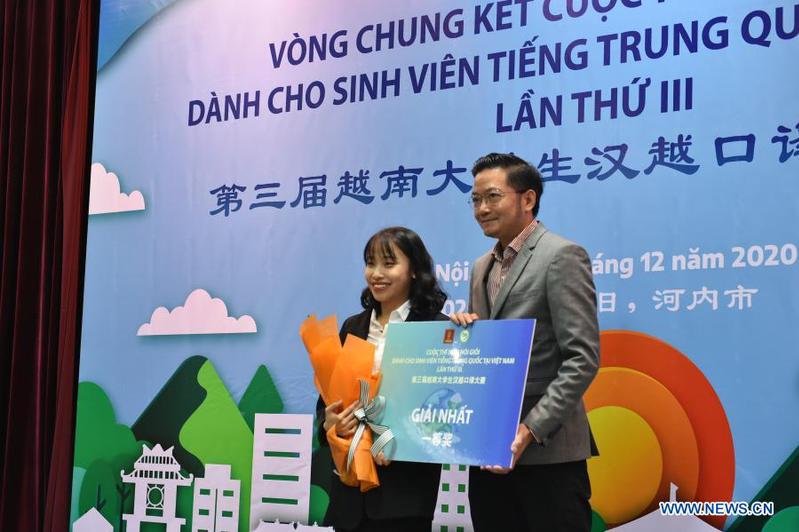 Do you have some great news to share?Email us at